Our 2021 AAOA Basic Course in Allergy & Immunology will be launched June 1st: Over 11 hrs of pre-learning, on-demand will set you up to gain the full value of our curriculum and engage in the live-stream session.

Structured for otolaryngologists integrating more allergy assessment and management into their practice, AAOA members providing specialized allergy care who need to remain current with literature-based evidence and practice trends, residents, PA/NPs who work in otolaryngology, and allied health staff who support their physicians in the management of allergic patients. The Basic Course offers unique opportunities to learn the state of the art in allergy patient care. Learn More

Have novel research tied to allergy, inflammatory disease in ENT, comprehensive management of allergy and…

Runny nose, sneezing and cough – Is it a cold or allergies?

By Christine DeMason, MD While patients with a cold and allergies generally have the same symptoms (runny nose, nasal drainage, congestion and cough), they are…

This year’s Annual Meeting assures to be not only educational, interactive, and practice-centered, but also fun! We offer several networking and social events for you to meet new people, learn from peers and just enjoy your time in Philadelphia! You won’t want to miss it!

Due to popular demand, we will again be featuring our outside the-classroom series: Content Meets Culture—Conversations with Experts. These sessions will be small groups led by AAOA faculty in an informal, topic-focused discussion while touring Philadelphia. We hope to blend a small amount of education with large amounts of fun. These sessions will be offered as walking tours or as a tour inside the Loews hotel. Philadelphia has so much to offer and we want to allow you to enjoy part of Philadelphia while learning by taking the meeting out of the hotel and into the city.

Philadelphia played an instrumental role in the American Revolution as a meeting place for the Founding Fathers of the United States, who signed the Declaration of Independence in 1776 at the Second Continental Congress and the Constitution at the Philadelphia Convention of 1787. Several other key events occurred in Philadelphia during the Revolutionary War including the First Continental Congress, the preservation of the Liberty Bell, the Battle of Germantown, and the Siege of Fort Mifflin. Philadelphia was one of the nation’s capitals during the revolution, and served as temporary U.S. capital while Washington, D.C. was under construction. You will be able to better appreciate Philadelphia’s role in American history on several of the walking tours. The revolutionary city tour will include a visit to Independence Hall, the Liberty Bell, Congress Hall, and Washington Square.

Philadelphia is known for its murals. There are over 4000 murals in the city, many of which are within a short distance of our hotel. One of our tours will feature the history of the Mural Arts Program, including how the murals are created, some of the mural artists and some of the specific murals. Philadelphia is also known for its public art including that from Alexander Milne Calder and Henry Moore. The public arts tour will cover Love Park and the Basilica.

On the concise history of medicine tour, we will retrace the footsteps of Benjamin Franklin visiting the first hospital in the country. This tour will also visit the home of the father of American surgery, Dr. Philip Syng Physick.

Whatever your interests are, we hope that you will find our outside the-classroom series fun and educational! There will be varied educational content presented during these featured tours including migraine headaches, evaluation and treatment of the chronic cough patient, the intersection of allergies and chronic rhinosinusitis, and a food allergy update.

On Friday evening, the AAOA will host an exhibitors’ reception featuring Philadelphia’s iconic culinary staples offering you a true taste of the City of Brotherly Love. During this authentic Philadelphia experience, you will be able to mingle with the faculty to get some of your most important questions answered while sampling true tastes of Philly including the iconic cheesesteak, soft pretzels, South Philly Italian, and samples of Amish specialties to name a few. 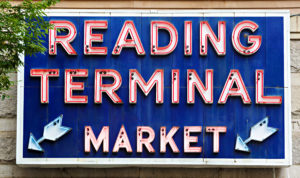 On Saturday evening, the AAOA, our faculty, and professional consultants will host a reception at the Reading Terminal Market (RSVP Required). During this unique Philadelphia experience, you will be able to mingle with the faculty and consultants to get some of your most important questions answered.

Markets have been a part of Philadelphia’s history since the city’s development by William Penn in the late seventeenth century. Today’s Reading Terminal Market had its roots in the Butchers’ and Farmers’ and Franklin Markets, both located on the 1100 block of Market Street. In 1890 the Philadelphia and Reading Railroad Company purchased this block for its new terminal. The merchants’ refusal to relocate for the new building resulted in an agreement to erect a new market tucked beneath the train shed and tracks.

The Reading Terminal Market opened for business on February 22, 1893. The street-level Market reverberated with the sound of trains rumbling overhead. The stalls were laid out in a grid pattern with twelve aisles running east-west and four wider avenues running north-south. Sawdust was spread on the floor to absorb spills and moisture rising from the vast cold storage facility in the basement.

Today, Reading Terminal Market is once again the gastronomic bazaar that its original planners had envisioned. Many of the historic Market stands survived the reconstruction and are once again filled with local produce. The Market is home to more than 80 merchants, two of whom are descendants of the original stand-holders. You will find an eclectic array of fresh baked Amish goods, authentic Philadelphia food including Philly cheesesteak sandwiches, delicatessens, seafood, and a new mix representing today’s Philadelphia community. We will have the Reading Terminal Market to ourselves to explore and taste many iconic Philadelphia treats during our reception.

Register for the 2018 AAOA Annual Meeting

Should I Go to Austin?

Here is What You Missed…

2019 New Orleans was an outstanding success?  With over 500 participants, our AAOA members left New Orleans re-energized, re-freshed, and re-engaged.  The program offered something for everyone — from cutting edge clinical content to every day how to’s for practice…

Join AAOA in the Lone Star

Join us in the Lone Star State for the 2019 AAOA Advanced Course in Allergy and Immunology. This course builds on the basic clinical care of allergic patient concepts and techniques presented at the AAOA’s Basic Course in Allergy &…